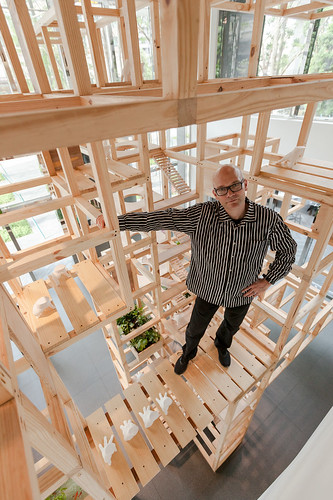 A city encompasses all; it contains all individual entities and relates them to one another. Because of these mutual relations of each entity, a city continues evolving. A city is an organic body, under all kinds of forces, it continues to transmute, becoming the materialized body of our collective consciousness and responding to our common or uncommon wants and desires.

Coming from Finland – the land of a thousand lakes – a country close to the spirit of nature, Marco Casagrande, ever since his first encounter with Taiwan, has led us to see our hometown from an unexpected perspective. Through his various actions, he subverted our understanding of our country. His cooperation with the Jut Foundation for Arts and Architecture came from our shared enthusiasm with cities and our unrestrained attempts to reinterpret nature. In 2010, serving as a foreman, Casagrande headed a team of “Anarchist Gardeners” to work on a deserted 4-floor apartment. They introduced wind, rain and light to the relics abandoned by an industrialized city, and started urban agriculture indoors. He freed all the constraints upon the space by creating the Ruin Academy at this delipidated apartment as an experimental platform for the following study of the Third Generation City.

The Academy organized three workshops in the years between 2010 and 2011. It emphasized the accumulation of local knowledge and folk wisdom where our memories stored. In a capitalist society, this space served as an open living room with a window that framed a different view for the future of our city.

Since its establishment in 2007, the Jut Foundation for Arts and Architecture has tried to employ its resources to collaborate with architects around the world who have unique discourses on city development. The Foundation functions as a research lab that conducts investigation and experiments on city dwelling, urban environment and spatial cycles. Living in the urban webs, what kind of a future do we really want?

Founded in 2016, the Jut Art Museum is dedicated to architects devoting to the exploration of the future, as well as people motivated to participate. This event is the first solo exhibition of Marco Casagrande in Taiwan, to present his idealism of Zero City and The Third Generation City—the idealism addressing the development of cities for the coming generations. Casagrande’s contemplation and actions have given us crucial clues, and broadened our angles.

This exhibition includes transdisciplinary projects of architecture and art. We attempt to break through the framework we had applied before and provide the audience with freestyles of attending this venue. The circulation is flexible and the logics of display are unconventional. There are spaces, graphics and objects produced by diverse materials and ideas. They lead us to the new possibilities of being in a city, in nature, or in any environments.

In addition to the exhibition in the Jut Art Museum and the independent newspaper Marco Casagrande insists to release, the planning of ZERO CITY also comprises an ambitious publication: Marco Casagrande: Who Cares, Wins the Third Generation City which is presenting soon. From the experience of the physical space to the compilation of images and texts coming from Casagrande’s theories and practice, you, the city dwellers, are invited to look into the next phase of our city through Casagrande’s sharp eyes.

The organic urban organism of Treasure Hill was the first glimpse of the Third Generation City. The networks of the self-organized Taipei community gardens presented the first real map of Urban Acupuncture. The ruins, the insects, the urban bonsais and the anarchist grandmothers opened a very different view to architecture as something man made becoming part of nature, and with nature as the co-architect. Local knowledge, parasite urbanism, insect architecture, urban nomads, citizen gardens, illegal architecture, biourbanism, real reality and open form - the official city is just a back-drop. No trends, no style, but constructive anarchy. Accident – human error, the simultaneous ruin and the construction site of eternity.

A wasp (Phimenes sp.) kept coming to my red bucket of cement, stealing a mouth-full and flying away. For three days I followed my little bright-yellow-black friend, then it disappeared. After some months I found its cocoon downstairs of our T-factory ruin. It was made from cement mixed with soil, little stones and small pieces of wood. It had a smaller vaulted chamber with a skylight and a bigger dome where it had organized his larvae to mature. The bigger dome also had an opening on the roof. This wasp knew exactly how to use concrete. It was an industrial insect. It took my mind into insect scale and I wondered the architectural quality of the cocoon. We are all industrial insects, but our cocoons are not happening.

This exhibition is about architecture as environmental art. Architecture as the art of reality. There is no other reality than nature. The works are constructed between 1999 and 2017. Roughly half is made in Taiwan and half in other countries. They follow the principle of Open Form and pay homage to human hand.

The mediator between the head and then hands must be the heart.
- Fritz Land, Metropolis

To find a form that accommodates the mess, that is the task of the artist now.
- Samuel Beckett

In a dream last night, I saw a great storm. It seized the scaffolding. It tore the cross-clasps, the iron ones, down. But what was made out of wood, swayed and remained.
- Bertolt Brecht